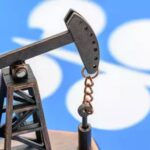 OPEC+ has called a meeting on Sunday, delegates said, after the group made significant progress toward resolving a standoff with the United Arab Emirates that had blocked a deal to boost output.

The online conference of ministers is scheduled for 12 p.m. Vienna time, although one delegate cautioned that not every minister had yet confirmed attendance. Ministers from Saudi Arabia, Kuwait, the UAE and Oman met online on Saturday to discuss the matter, delegates said, asking not to be named because the information isn’t public.
What’s moving markets
The meeting follows signs that tensions between Riyadh and Abu Dhabi were cooling after an unusually public fight. Earlier this month, the Organization of Petroleum Exporting Countries and its allies were forced to abandon a tentative deal to boost oil production in monthly installments of 400,000 barrels a day because of last minute objections from the UAE, which said its output limit was unfairly low.

The collapse of talks briefly sent crude to a six-year high in New York, although prices have dropped since to trade just below $72 a barrel on Friday.

Earlier this week, the two sides were said to be nearing a compromise that could give the UAE a more generous output limit next year and allow the rest of the group to raise production.

If there is a deal on Sunday, it is unclear how quickly additional supplies can be delivered to the market. August sales volumes are largely locked in and most Gulf countries are preparing for an Islamic holiday that will close government offices and businesses for most or all of next week.

Without extra output from OPEC+, the International Energy Agency warned on Tuesday that the oil market will “tighten significantly” and potentially damage the economic recovery.

The UAE’s dispute with OPEC+ centers around its demand for a higher production limit next year, in return for backing an extension of the cartel’s current agreement from April 2022 until December 2022.

Last week, the UAE was ready to set its new baseline at 3.65 million barrels a day, one delegate said. Another delegate said that figure was likely to change.

Oil analysts have warned that the UAE’s demand could open a “Pandora’s Box” for OPEC+ as other members seek better terms to redress grievances of their own. Sure enough, Iraq is also pursuing a higher production baseline, according to a delegate, who didn’t specify the number it’s requesting or when it would take effect.

Like the UAE, Baghdad has bolstered production capacity since the OPEC+ accord began with the assistance of international companies.

The post OPEC+ Calls Meeting for Sunday After Progress Toward Deal appeared first on .