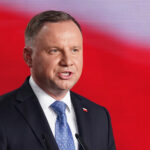 Global leaders should consider a role that central banks could play in helping the world shift to clean energy, Polish President Andrzej Duda said during a climate summit hosted by his U.S. counterpart Joe Biden.

Earlier this month, Polish central bank Governor Adam Glapinski said that his institution will be crucial in financing the country’s planned $30 billion nuclear energy project. The monetary authority will need to tread carefully, however, because it’s legally banned from direct financing of government spending.

“We should think how central banks could support energy transition of our countries,” Duda said during his speech on Friday, without elaborating.

Duda also said that Poland supports the climate goals set out by the European Union and has ambitions to reach them. The country plans to build nuclear, wind, solar and gas-fired plants to help reduce the share of coal in its power generation to as low as 11% in 2040 from 70% now. The EU’s most coal dependent country has been in talks with the U.S. on nuclear technology and is set to make a final investment decision next year.

The post Poland Says Central Banks May Have Role in Clean Energy Shift appeared first on .