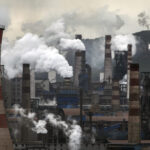 Energy News Beat Publishers Note (ENB): While this is cool that the rest of the world looks at China’s requirement of 66% decrease in power emissions to meet the Paris Climate Goals. Has anyone asked China if they have heard this? Does anyone believe that they will try, or be successful? Just asking for a friend.

China’s power emissions will have to fall two-thirds this decade in order for the world’s second-biggest economy to achieve its climate goals by mid-century.

The new research by the Chinese Academy of Sciences was published during a global climate summit hosted by U.S. President Joe Biden. At the meeting, Chinese President Xi Jinping reiterated the nation’s goal of becoming carbon neutral by 2060.

The data, published late Thursday in the journal Science, underscore that economies need to quickly transition to emissions-free energy in order to keep global temperatures from rising more than 1.5 degrees Celsius, a threshold that the world’s economies are on track to reach by March 2034.

“On average, carbon emissions in the power sector will decline by 65.6% across models in 2030, and near-zero or negative emission status could be attained as deep decarbonization proceeds over time,” the authors wrote. China will need to develop new technologies to capture and store greenhouse gasses, even as carbon and methane emissions fall 90% and 71%, respectively, by mid-century.

The findings highlight the important role that renewable energy technologies will play in the years ahead. Chinese solar and wind stocks gained on Friday following Xi’s climate pledges. The researchers warned, however that reaching the targets mean significant uncertainty for future economic growth.

The post China Power Emissions Must Fall 66% in Decade to Hit Paris Goal appeared first on .